Man Out of Prison: Nicolas Cage 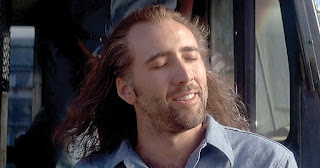 Counting down to the Netflix release of Evan Katz's adaptation of Dave Zeltserman's Small Crimes I'm looking at some of my favorite in the man-out-of-prison subgenre. Today I would like to talk to you about maybe my favorite recidivist - repeat offender (no sir that's one bonehead name, but that ain't me anymore) and perpetual outlaw, Nicolas Cage.

Dude's been in three of my favoritest man out of prison movies that all feature impressively strong vision and voice from iconic film makers.

Raising Arizona was my first exposure to The Coen Brothers (and to Cage) and one of the first films I remember having a pleasingly perplexed reaction to. I'd liked, even loved, plenty of other movies, but this one was operating on new levels for young me - there was so obviously a personality behind the camera, not to mention the magic being created by the cast (including Holly Hunter, John Goodman, Francis McDormand, Trey Wilson, Sam McMurray, William Forsythe and Randall "Tex" Cobb) that I had to take notice. 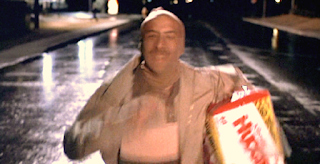 Poor H.I. McDunnough can't seem to stand up straight and fly right. Every time he gets out of the joint for another impulsive no-ammo liquor store robbery he promises himself, his parole board and his police officer love, Ed (short for Edwina - turn to the right), that he's done with crime and going to be an honest man. But every time he's faced with a little hiccup in his life criminal means are the first impulse. 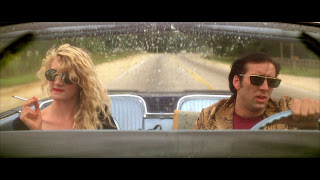 Three short years later came David Lynch's Wild at Heart. Cage plays Sailor Ripley who was just a bad boy with a soft heart for the lovely teenaged Lula Pace Fortune (Laura Dern) when he went to prison for killing Bobbie Ray Lemon who was hired by Lula's momma Marietta (Diane Ladd) to kill Sailor, who's not only not good enough for her baby girl, but has maybe witnessed some dirty deeding done by herself and a gangster named Marcello Santos (J.E. Freeman) whom Sailor used to work for. But when he leaves prison a few years later, he's a man with a singular mission: to break parole by running away with his love. 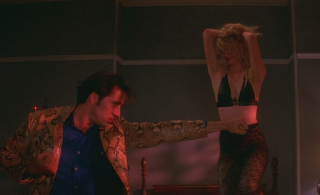 The young lovers on the run set off a violent and batshit crazy sequence of events that involve gangsters, hitmen/women, bounty hunters, private investigators, pornographers (Texas style) and armed felons all trying to tear the pair apart. Based on the great novel (the first in the Sailor & Lula chronicles) by Barry Gifford, Lynch threw in voodoo atmospherics, greaser sensibilities, Chris Isaak, a snakeskin jacket as a symbol of individuality and a belief in personal freedom, plus a shitload of Wizard of Oz references to make that thing distinctly his own. 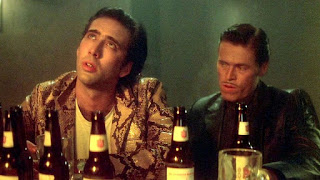 More than a quarter century later... 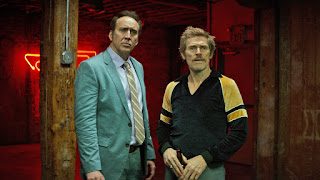 After Cage's career went from quirky, charismatic up and comer, to Academy-Award-winning dramatic heavyweight to A-list action hero to endless cheap-o get me out of trouble with the IRS schlock-factory productions to hey, I'm still here doing quality work with motherfuckers like Spike Jonze, Werner Herzog and David Gordon Green he teamed up with Paul Schrader (whose career had taken a similar trajectory) for an adaptation of one of my favorite crime novels from a vanguard of man out of prison fare - Edward Bunker's Dog Eat Dog. 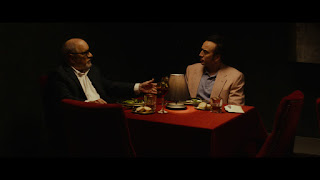 As different an experience as reading Gifford's book and watching Lynch's film, Schrader's take on Bunker's source material is a wild departure in tone and style, but demonstrates a willingness to soldier on long after the last fuck was spent and put together a (perhaps disjointed, but often electrifying) collection of scenes and performances depicting yet another Cage character who has spent his life in and out of jail and has finally reached the age where he can't/won't go back (three strike laws were a common theme in Bunker's work - laws that turn otherwise non-violent criminals into killers at the drop of hat 'cause it's life in prison regardless the charge). 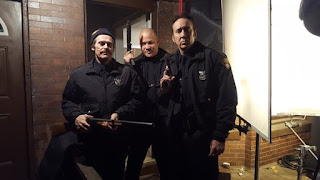 Cage's Troy is not a particularly bright bulb, but shiniest amongst his compatriots in criminality Mad Dog (Willem Dafoe) and Diesel (Christopher Matthew Cook) and his just out of the joint leadership and dysfunctional sense of loyalty will take them on their final tour of depravity. Along the way we'll be horrified, titillated, highly amused and sad for all the sorry sons of bitches left dead in the wake of these dumbshit motherfuckers.
Posted by jedidiah ayres at 4:48 PM