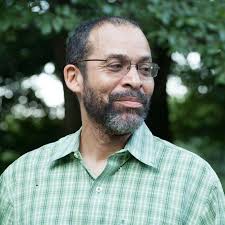 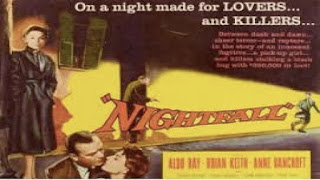 Jacques Tourneur made Out of the Past of course, one of the greatest film noirs of them all. Less heralded but also excellent is this adaptation of a David Goodis novel, which stars Brian Keith, Aldo Ray, and a young Ann Bancroft. Not unlike Out of the Past, Nightfall tells its tale partly through flashbacks, and it’s very strong on mood. It’s noir to the core, though a lot of it takes place in snowy, bright lit landscapes. The camerawork, by cinematographer Bernard Guffey, is highly atmospheric. And in 79 minutes, the Stirling Silliphant script packs in a good bit of plot.

One thing about Tourneur that was unusual and that was pointed out to me in something I read by French filmmaker Bernard Tavernier: in his films Tourneur nearly always has his actors talk in low, calm tones. They almost never shout or engage in histrionics. There may be a lot of tension in a situation, but Tourneur’s actors talk in a modulated yet naturalistic way. This way of handling dialogue is really noticeable in Nightfall, and it makes the characters that much more real and believable to the viewer. Another low budget winner from Tourneur. 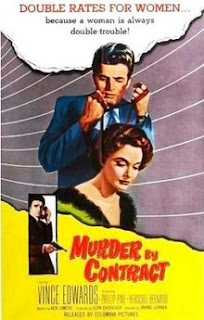 I learned about this film when I watched Martin Scorsese’s A Personal Journey with Martin Scorsese Through American Movies in the mid-1990s.  It is indeed a remarkable film about an existentialist contract killer hired to kill a woman who is a witness in a high-profile trial in Los Angeles. The woman  virtually never leaves her house and has police protection, so the job is difficult. In addition, the contract killer, Claude, has two assistants who don’t prove all that helpful. Murder by Contract has a spareness that turns a low budget to an advantage, and its cool, ironic approach was ahead of its time. This has to be a film that not only Scorsese loved (he says it’s the film that influenced him the most), but that someone such as Jean Pierre Melville must also have loved and learned from. There is not a wasted frame in this movie, and it has a sense of absurdism, in the dialogue and in how the plot unfolds, that’s timeless. Besides all that, there’s a striking musical score, all played on the guitar (not what you’d expect). Kudos here, too – as with Nightfall – to a masterful cameraman, in this case Lucien Ballard, who works wonders within the budgetary restraints. Murder by Contract is the quintessential example of no-nonsense, amoral, and often darkly funny noir. 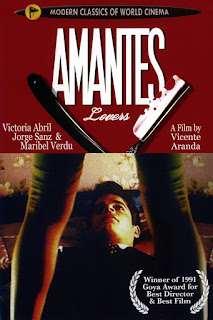 Though made in 1991, this film’s plot was based on a real crime that took place in Spain in 1949. The film’s story itself takes place in the mid 1950’s. It concerns a young man named Paco, in Madrid, who is finishing up his military service while looking for both a job and a place to live in the city. He is engaged to be married to a sweet girl who is his commanding officer’s maid. His finance, Trini, has worked hard for many years and though young like Paco, has been smart and disciplined enough to save a good bit of money. Trini helps Paco find lodging, not knowingly referring him to a widow named Louisa, who takes in boarders. Louisa is played by Victoria Abril, and she plays the widow, who you discover has a criminal history, brilliantly.

In brief: Louisa is attracted to Paco and quickly seduces him. It doesn’t help that Trini, sweet and warm as she is, refuses to sleep with Paco and says she won’t do that until they are married. This being Spain in the 1950’s, her attitude is quite believable, but it doesn’t help her position. We have a classic three-way noir situation, a man and two women, one being something of the classic seductress, the other virginal, except here all the characters have depth and nuance. Both Louisa and Trini, different as they are, are intelligent and strong-willed. The money Trini has becomes important in the plot, but Louisa has real and very strong feelings for Paco above and beyond the lure of any cash, and when Louisa’s ties to the underworld threaten her, it is Paco, not Louisa, who suggests they swindle Trini out of her money. Lovers is a story of tragic passion involving three complex people, and despite its film noir architecture, does not proceed quite as you might expect. It’s beautifully dark and somber, and like a number of films Victoria Abril was in around this time, it has an erotic directness that is striking. She’s known in the United States primarily for the films she did with Pedro Almodovar, but she actually made more films during her career with Vincente Aranda, another giant of Spanish cinema. Lovers was the ninth film they did together, and it’s very good. 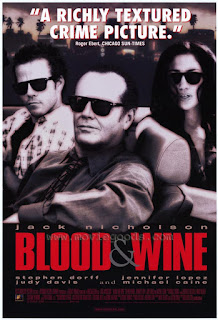 A sharp, tense neo-noir that teams old friends Jack Nicholson and director Bob Rafelson. Rafelson said that the film is the final part of an unofficial trilogy the two did together, from Five Easy Pieces to The King of Marvin Gardens to this crime film. All three movies involve Nicholson in fraught familial relations, in this case as a husband in a failing marriage and as a father to a son he’s become indifferent to. Judy Davis plays his alcoholic wife, Steven Dorff the unhappy son, and the cast also has Michael Caine as a career criminal and Jennifer Lopez as a woman who both the father and son are attracted to.

There’s nothing fancy about Blood and Wine and that’s one reason like it. It’s a film with a tight plot focused around a jewel heist, and it puts a lot of attention on its characters and their flaws. It makes clear that things go bad for them because of how they have chosen to live their lives. All the actors are in strong form, with Lopez – not yet a big star – restrained and in character, Nicholson never once hamming it up and Caine doing oily and vicious like only he can. It takes place in South Florida and the Florida Keys, and the locale, with its lushness and heat, adds a pungent texture to everything.  Everybody strives and jockeys for position, but does anyone ever really win? 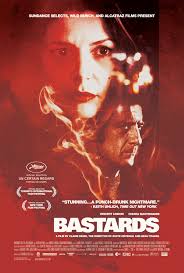 Film noir Claire Denis style. That means it doesn’t have a plot that falls into any familiar noir template, and it may leave certain gaps for you, the viewer, to fill in. Because Denis, always, does things her own way. Bastards is both dreamlike and fragmented in how it’s structured, and it may take a couple of viewings to fully grasp what happens. But believe me, it’s worth it, and like all Denis’ films, it has a tone, a mood, that completely envelops you as you watch.

And the plot, elliptical as it is? It involves a man seeking revenge against a rich businessman he holds responsible for the suicide of his brother-in-law and the rape of his niece. His niece, who has been hospitalized, may need surgery on her vagina because of damage done during the rape. The rape may have involved (allusions to Faulkner’s Sanctuary must be intentional) a corn cob. I don’t want to give anything more away, because the ending of this film, the very last image, is as harsh and unsparing as noir gets. Bastards indeed. This title is not kidding. Claire Denis has spoken of how all her films have at their center a moment, an action, of transgression, and this one has it in spades. More than one, in fact. A film you don’t easily forget, and a great score by Tindersticks. 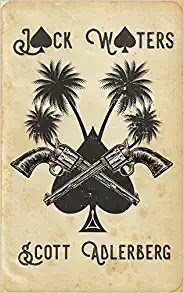 Posted by jedidiah ayres at 5:21 AM