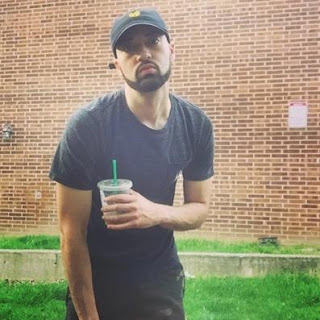 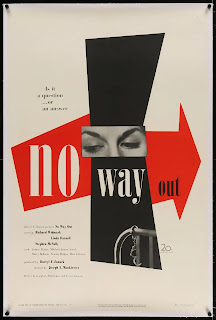 When a white robber dies under the care of a black doctor only suffering from a gunshot wound to his leg, his racist brother/accomplice blames the doctor for the death. The doctor (Sidney Pointier) wants an autopsy performed to determine the cause of death to prove it was not his fault, but the racist brother won’t allow it. When word travels outside the hospital things spiral out of control and incites a race riot.

No Way Out is a noir film that’s centered around race and racism. The fact that this is a movie before the civil rights movement really began makes it all the more interesting. The film really gives you a glimpse of the racial politics of that era. This film is also Sidney Pointier’s big screen debut. 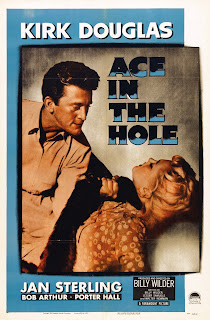 Kirk Douglas plays disgraced journalist Chuck Tatum, who ends up working for a small Albuquerque newspaper after being fired at every other major newspaper he’d previously worked for. On his way to cover a rattlesnake convention he doesn’t even want to write about, Tatum comes across a man trapped in a cave in a small desert town. The unscrupulous journalist decides he can make this into a national story and stage a career comeback even if that means ensuring that the trapped man stays trapped longer.

I won’t delve into anymore plot details beyond that. It’s a Billy Wilder film. That should sell anyone on it. Also Kurt Douglas uses the carriage return on a manual typewriter to strike matches so he can light his cigarettes. That’s noir as fuck folks. 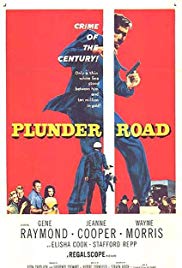 After five men rob a US Mint train they split the gold they’ve stolen into three trucks and make their way from Utah to Los Angeles. A long the way shit goes bad.

This movie opens with a train heist of gold from the US mint that’s 14 minutes long and nothing short of masterful. Which makes how they set about making their escape all the more tragic. An alternate title for this film could be Blunder Road in this respect. 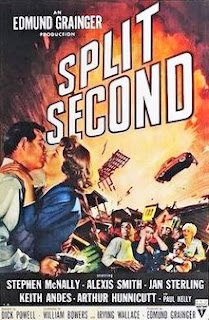 Two escaped cons take hostages and hide out in the one place they know no one will come looking: a mining ghost town in the desert where an atom bomb is scheduled to be tested the next morning.

This movie has such a great 50’s era concept. The atom bomb testing element is so of the time and really raises the stakes for the characters in this film. Everyone in this movie is waiting for a bomb to drop at any moment both literally and figuratively. 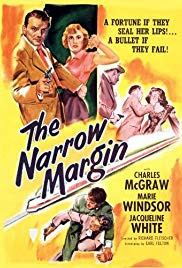 A cop is tasked with protecting the wife of a dead mobster from hitmen as they travel by train from Chicago to Los Angeles where she will testify against the mafia.

If I had to sum up my thoughts on The Narrow Margin in four words they’d be: This shit goes hard. There’s no fat on this movie. It’s a very straight forward bare-bones plot. The setting of the film is fitting because it moves like a fucking bullet train.

Ryan Jackson is a screenwriter who’s wrote many things for money that have not seen the light of day. He wrote the recently announced movie The Inside Game with actor Tyrese Gibson. Ryan plans on directing his next script because he’s a control freak. Ryan also writes fiction (as if the movie industry isn’t torture enough). You can follow him @RyanJackson on Twitter.
Posted by jedidiah ayres at 6:16 AM