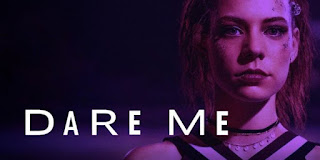 Can't believe it's been seven years since Megan Abbott's Dare Me came out. Now that we're hours away from the debut of the television series adaptation of the book (on USA network) it seemed like a good time to re-post this piece I wrote for another site back in 2012. 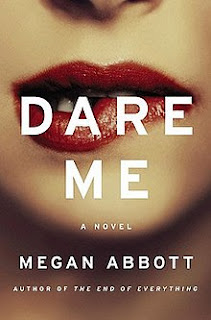 While watching the Olympic gymnastic competition the other night, I found myself marveling at the unreality of the feats those (very young) ladies performed, and at the end of the evening, disappointed that I'd somehow missed the cheer event. My momentary slip in Olympic-know is easily attributed to having just read the fantastic cheerleading-centered book Dare Me by Megan Abbott, and being carried away on a wave of mutilation and admiration for the rigors of the under-sung team sport of cheerleading. Regardless your associations with the cheerleader's image (check out Megan's essay on the cultural cheerleader in the New York Times), I bet you're as unprepared as I was for this vision of shiny-faced, bow-string taught-bodied warriors who engage it like bloodsport. Gone, it seems, are the days of simple dance routines, and investment in the boy's sports they're supposedly existing to promote. These girls are in parallel competitions with the opposing squad and themselves as they hurl each other through deadly demonstrations of precision and coordination you could set your watch to. 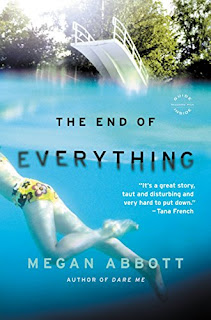 Dare Me marks Abbott's second foray into the sometimes dark territory of the development of teenaged girls and while last year's The End of Everything focused on an the loss of innocence (and another high school nu jock - a field hockey player obsessed with the bruises and scars of her battles), Addy, the heroine this time around may take a back seat in the clash of personalities that drives the book, but she's already left her kid gloves behind.

When the squad gets a new coach at the beginning of the school year, it's a scene straight out of a Marine Corps drama - the platoon and the drill sgt. sizing each other up - and the conflict sparked in that opening (between Addy's best friend/rival the squad captain and the coach) sets Addy squarely in the middle when things really go sideways.

And they do. Big time. 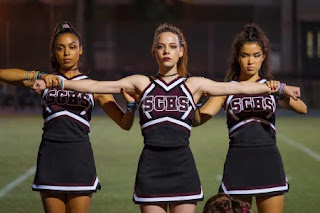 The mystery unfolds late in the book - allowing for our complete submersion into the characters' mindsets before we're asked to choose sides, select the alibi that pleases us most (or upsets us least). When one of the characters is found shot through the mouth in an apparent suicide... yeah, the crime scene doesn't really add up, and Addy has plenty to hide of her own involvement nevermind making impossible choices of loyalty, and keeping her head in the game. Nothing builds the suspense of the success of a death defying stunt like the suspicion that someone involved may have it in for you (more than one scene in this book had me remembering Stunt Man - about a movie stunt man who thinks that his director is trying to kill him).

But the show must go on. The tunnel vision of the narrative voice is such that, though we are with these girls for several months, and we see clues about the affluent neighborhood Addy's grown up in, there is nary a glimpse of her parents (we assume that she is an only child), and though a large portion of the story takes place on school grounds there is hardly a mention of any non-cheer-squad students. Even a squad member who suffers an injury and is forced to watch from the sidelines is rendered 'other' when she makes the observation that watching the routines from a distance "it's like you're trying to kill each other and yourselves." - to which Addy replies "You were never one of us." 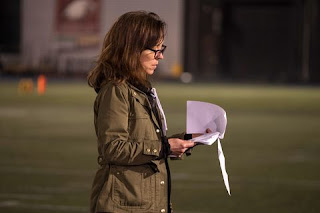 The single-mindedness is maddening, frightening and admirable in equal portions. Abbott warmly invites your opinions and pre-conceived notions inside before locking the doors and forcing them into an extreme makeover... with a blow torch... and nail polish. The militant significance of a bobbing pony tail, aggressively rouged and sparkle-spattered cheekbones now apparent, there's no un-seeing it.

Take the sports movie glitter of Bring It On, and apply it liberally to the moody hardboiled throwback sensibilities of Brick, dilute the self-conscious weaponized sexuality of Wild Things with the wide-eyed charge of early eros ala Blue Velvet and grate a block of Bully's invisibility of the outside world over the top and you've got - nothing close to Dare Me. 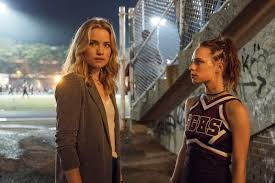 For anybody curious whether Dare Me is to Abbott's short story Cheer what Queenpin was to Policy, the answer is 'not really'. There is a scene very similar to the daaaaaark end of Cheer in Dare Me, though it's not got nearly as nasty an edge to it, and is neither the book's climax, nor the instigating spark of the action. 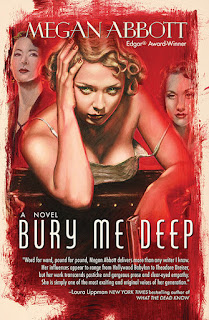 If the televised version of Dare Me is your first exposure to Megan's work lemme suggest you rectify that quick-like. I'm especially fond of her first four mid-century noirs; Die a Little, The Song is You, Queenpin and Bury Me Deep and thankfully we live in a world where I've still got books to catch up on.
Posted by jedidiah ayres at 12:13 PM