Merry CrimesMas: Sarah Jilek on It's a Wonderful Life 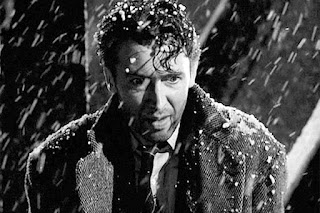 I have watched It’s a Wonderful Life every year since I can remember. Before writing this essay, I watched it again—in color, for the first time. It is not the same film in color. It does not make sense in color, because it is a film noir. 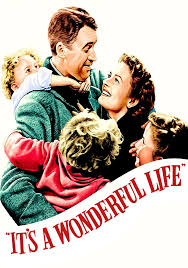 I’m not the first one to make this claim. Michael Wilmington over at Film Noir Blonde took this stance in 2015, providing an exhaustive list of the film’s actors and their past or future credits in noir at the time of filming. Shannon Clute and Richard Edwards also agreed way back in a 2005 episode of their podcast Out of the Past: Investigating Film Noir.

Historically, film noir has been a difficult genre to define, but there are recognizable elements—for example, an anti-hero protagonist, a femme fatale, crime (obviously), certain stylistic elements, and a generally bleak worldview, just to name a few.

But wait, you might be saying, IAWL doesn’t have any of these things, especially not the latter—there’s a reason it’s the movie you watch on Christmas Eve with your family and get all choked up after one too many rum-and-eggnogs. (Just me??) 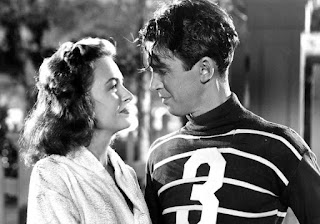 But consider this: George Bailey, despite being a famous fictional “family man,” never wanted a family. He never wanted to get married. George never even wanted to live in Bedford Falls at all, much less follow in his father’s footsteps at the “crummy old Building & Loan.” But, like a noir anti-hero protagonist, he is isolated—all his friends grow up and leave him; he’s 4-F so he can’t fight in the war; life seems to conspire against him. All the events of his past (for, like many films noir, most of IAWL unfolds in flashback) and many of the people in his life work to keep him trapped in his hometown, trapped in his dead-end job—even driving him to the brink of suicide. It’s a noir that is deeply domestic, deeply rooted in this particular character’s anxieties and ideas of masculinity. Real men don’t get married and raise kids and scrape by in a “shabby little office.” Real men explore! They see the Fiji Islands! They build skyscrapers and bridges and monuments! For George—throughout much of the film—domesticity is the opposite of masculinity, and is therefore a vision of horror.

If domesticity is George Bailey’s personal horror, then the person who traps him most fully is Mary. She is the femme fatale, the one who seduces and ensnares him. Other arguments for why IAWL is a film noir cite Violet as a femme fatale figure, but really, it’s Mary. As a child, she whispers her undying love for George in his bad ear while he goes on about his future harems and the Coral Sea. As an eighteen-year-old girl, she breaks a window in their fated future home, her wish casting a spell of domestic entrapment on George. We see this foreshadowed in the scenes before the two get married: instead of the Venetian blinds of classic noir, picket fences cast their long, slatted shadows over George like the black armband of mourning for his father. Something within him will die, we understand, if Mary’s spell works, if he stays in Bedford Falls. 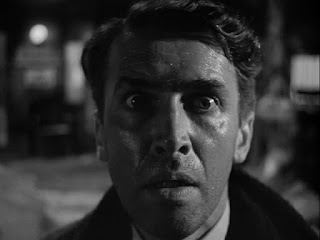 So how do we get all the way from this “warped, frustrated” view of domesticity to the iconic tableau vivant of George Bailey surrounded by his loving wife and kids, crying tears of relief to once again find himself a part of their family? We need to take a closer look at the other noir elements in the film.

On the issue of crime, I direct your attention to the line, “It’s against the law to commit suicide around here,” a line which puzzled me greatly as a child—I imagined a dead body hauled into a jail cell to decompose. The line itself, combined with its delivery by the spooked, wary bridge operator, is one of the most memorable lines to me, because it’s so darkly funny, and Clarence’s confirmation that it’s “against the law where [he] come[s] from, too” was a chilling reminder to me, a little Catholic girl still in Sunday school, that not everyone would make it to heaven after all (camel, eye of a needle).

However, even more memorable is the moment when Potter keeps the eight thousand dollars mistakenly handed to him by Uncle Billy. In fact, my stomach still sinks every time that scene begins. Surely, this time it will be different, I think. Surely Uncle Billy will put the money in his coat pocket. Surely the string tied around his finger like the red string of fate will remind him. But it doesn’t, and the money’s gone, and Potter steals from the Baileys like we always knew he would, infirm and cantankerous in his kickass carved mahogany wheelchair. He’s everything a noir villain should be. He’s everything George Bailey is not.

When George stumbles deliriously through snowy Pottersville after Clarence and St. Joseph grant his wish, we get to see what the inhabitants of Bedford Falls would be like if they had to come “crawling to Potter” instead of George. Martini’s is no longer a family restaurant and bar where you can get a plate of spaghetti with your wine on Christmas Eve—there are (gasp!) black people there, or at least one, playing the piano, and Nick the bartender serves “hard drinks for men who wanna get drunk fast.” The town is filled with pawn shops and dance halls and strip clubs, and we even see our girl Violet dragged out of one—bags under her eyes, hair disheveled, shrieking, “That sailor’s a liar!” The implication: without George Bailey to lend her money every now and then, Violet would have become a sex worker. 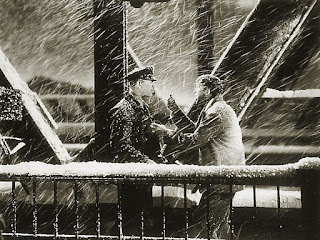 George Bailey, wanted by the police in two alternate timelines, facing “bankruptcy and scandal and prison,” is confronted in Pottersville with a horror truer than the imagined horror of domesticity: his own powerlessness. He cannot save Violet from a life of degradation, just as he could not save his brother Harry from the icy pond, just as he cannot save Mary from her fate as an “old maid.” It is up to him, he realizes, to be a man, and being a man does not mean abandoning his hometown, as he once thought it did. Being a man, George realizes, means taking care of people. It means lending your friends money. It means marrying the girl who loves you. It means holding onto Zuzu’s petals. Like his father said the night he died, it’s making a difference, in your own “small way.”

This realization would truly be “sentimental hogwash” if we hadn’t gone through a warped, frustrated noir nightmare to get there. Because we have gone through it, though, we’ve earned the final scene. Instead of the dark, churning river water, we get a roaring fireplace. Instead of the looming picket-fence shadows, we get George kissing the broken banister as he runs to his children. Instead of George drinking alone on Christmas Eve and getting punched in the face, we get wine passed around in a house full of friends. The dark, frightening outside melts in the face of the bright, comforting inside—the home—and George takes his rightful place within it. I don’t have time to get into the moral/political significance of this ending for the nuclear family in 1946, or why the film was originally a flop, and truth be told, I don’t want to. I only want that ending, forever: that feeling of coming inside, out of the cold. 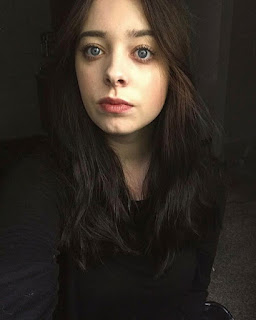 Sarah Jilek's stories can be found at Press 53, Tough and in Switchblade magazine. Look for her novel Shitshow summer 2020 and follow her on Twitter @SarahJilek.
Posted by jedidiah ayres at 5:38 AM