Merry CrimesMas: Pete Dragovich on Three Days of the Condor

Three Days of the Condor seems like less a Christmas movie than just the perfect Christmas Day release, the type of adult middlebrow entertainment both the “home for the holidays” siblings and their parents could enjoy at a matinee after opening presents and having a nice breakfast. It’s an excellent 70’s paranoia thriller that has plenty of Old Hollywood glamour and action to help wash down its sobering New Hollywood distrust of American institutions. Unlike another similarly engaging Faye Dunaway classic, Polanski’s Chinatown, Condor doesn’t want to stomp on your heart and defile your corpse in the last reel, merely raise tough questions regarding the likelihood of Redford’s idealistic Joe Turner actually exposing the CIA’s corruption.

And I mean, sure, shit gets pretty bleak in the end but it can’t wipe away the fun of Max von Sydow’s refreshingly pragmatic and gentlemanly hit man character Joubert, or the offbeat coziness of stylish photographer Kathy’s (Dunaway) basement apartment and our enjoyment of the dialogue, sex and violence that took place therein. And can you walk away sad from a movie features Robert Redford at his most charming and handsome with truly exquisite hair and wearing not one but two of the greatest coats in cinema history? 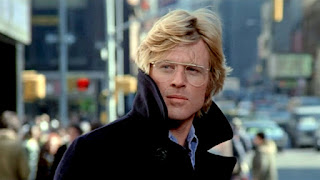 But shit, as much as I’d love to just list all the cool parts of a great movie (the ease with which Pollack sets up the massacre and the lightness and efficiency with which he lays out necessary info in the opening minutes is jaw-dropping), I think I’ll try to make a case for it as an actual Christmas movie. The holiday is invoked mostly through diegetic music. You hear “Good King Wenceslas” played by an unseen Salvation Army brass band while Joe wolfs down a food cart pretzel in the park while he’s killing time before contacting headquarters for the second time following the office slaughter. “Silver Bells” plays in the sporting goods store where he first sees Kathy buying ski gear (we later hear she’s supposed to be going cross country skiing in Vermont with her boyfriend for two weeks, which I guess is sort of Christmas-y too but Jesus, two weeks?). “Silent Night” plays in the distance while Joubert walks in the National Mall, collecting his money from Atwood and promising to kill Turner and Wicks. 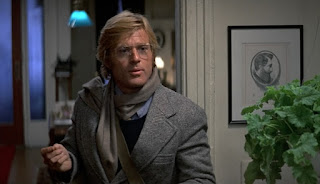 We get some actual Christmas decorations when Joe shows up at Mae’s apartment to find she hasn’t heard of her husband’s death nor of Joe’s girlfriend Janice’s murder either (“It Came Upon the Midnight Clear” plays throughout the scene on Mae and Sam’s stereo). We also get decorations on the desks of a few hospital nurses while “Joy to the World” plays as Joubert kills Wicks off-screen. Then in the final scene we hear “God Rest Ye Merry, Gentlemen” farting out of the Salvation Army band’s horns as Joe tells Higgins he’s tattling to the Paper of Record. We even get to see the band itself and a bell waggling Salvation Army Santa before the film freezes on Joe’s concerned face and the credits roll. 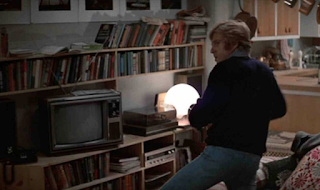 Now, full disclosure: there may have been a lady wearing a Santa hat walking by Joe’s apartment building while he stakes it out from across the street, but it might have also just been a red pointy hat with a white band across the bottom of it. Kind of a fucking stupid looking hat if it didn’t have anything to do with Christmas but, hey, I’m just trying to point out to you how closely I watched this mother for you, the Hardboiled Wonderland reader. Also, I listed all the Christmas references because I don’t believe in editing your research. You should show people how hard you worked so they pity you when something turns out lame as fuck. 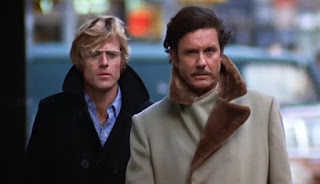 Because the only semi-decent Christmas connection I could come up with had to do with the blurpy-derpy live brass rendition of “God Rest Ye Merry, Gentlemen” that ends the movie. I think about that song whenever I think of this movie. That final confrontation, Higgins (Cliff Robertson’s shitty, toupee-ish, comb-over hair) getting the business from Turner (perfect, enviable hair) about how he’s gonna be exposed and the NYT is gonna sink him. Then, as Turner is walking away and you think you’ll get a satisfying shot like Higgins just impotently raging at him, he calmly says, “Hey Turner, how do you know they’ll print it? You can take a walk but how far if they don’t print it?”

They might print it and Higgins will go on trial and Joe will be the hero, get justice for his friends and co-workers and maybe restore some of his faith in his country. He doesn’t want to leave the States, doesn’t like the idea of living without an allegiance to his homeland like the practical Joubert. But if Higgins isn’t bluffing, well, resting merry is off the table and comfort and joy are hanging out in the shitter, waiting on the flush.

Do you believe the song? Do you “Remember Christ our Savior was born on Christmas Day to save us all from Satan’s power when we were gone astray?” Do you believe the Old Gray Lady will publish Joe’s account of what Higgins and the Company did? Or is Christ not our Savior and we are all still astray? Can Higgins actually stop that story, stop the free press from holding the CIA accountable, and thus Joe will be killed like all his friends? These are the questions that we’re left with at the end of Three Days of the Condor. Maybe your answers to these unanswerable questions, or rather your beliefs, are what determine whether Three Days of the Condor is a Christmas movie.

Pete Dragovich lives in Minneapolis and has written for such publications as Spinetingler Magazine, Hardboiled Wonderland and Crime Factory Magazine. He is on twitter @nerdofnoir and you can link to his dusty-ass blog there.
Posted by jedidiah ayres at 6:37 AM