All you need to know about LA Confidential and how it relates to Christmas happens within the first five minutes.

Officer Wendell "Bud" White, played by Russell Crowe with a fierce glare that somehow lasts the entire movie, starts pulling down Christmas lights and a plastic Santa to lure an abuser into his front lawn to take his well-deserved police brutality. 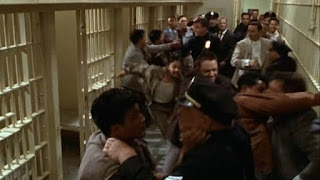 During the booze-fueled Christmas party, the cops get their blood (and blood alcohol content) up to the point where they're bold enough to start a brawl with freshly-booked Mexicans suspected of attacking police, and the press is there to make it front-page news.

And you thought your company Christmas party was off the rails?

Christmas descends into the background thanks to LA's constant, mild temperatures, ample sunshine, and much of the movie taking place where the brightness of the holiday season is too scared to touch: the broken-down apartment where assaulted women are held hostage, negotiation rooms with suspects pissing their pants, musty "down in the basement" records rooms full of boxes of manila folders from twenty years ago you can almost smell through the screen, just to name a few. 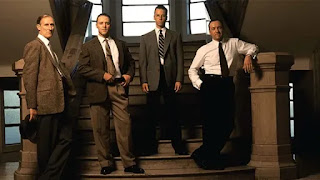 The film follows three likable and morally-flawed police officers trying to navigate the politics and procedures of 1950's Los Angeles. Justice becomes a balancing act where doing the right or wrong thing doesn't matter as much as the headlines the higher-ups can spin out of the results.

Jack Vincennes (Kevin Spacey) has sold his soul for celebrity, working on a Dragnet-style TV set as a consultant and executing public narco busts for the local tabloid magazine. 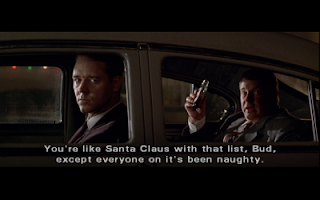 Officer White hates woman abusers, but he hates the code of ethics even more and throws hands at fellow officers, innocent suspects, guilty suspects, and it never seems to matter to him until his rage turns him into the thing he hates the most. 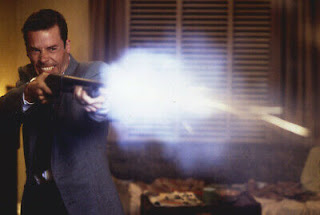 Edmund Exley (Guy Pierce) is the straight-arrow playing politics to fast-track his career, no matter who is impacted. What kind of movie is LA Confidential? It's the one where Exley is asked if he'd shoot a suspect he knew to be guilty to prevent a trial, and answers no, and two hours later, he shotguns a criminal in the back . . . and that's his heroic arc.

The bolstering force of the movie is Kim Basinger's Lynn Bracken, a Lana Turner lookalike hooker that ties all of the movie's main threads together, most notably the inner workings of Bud White. She won an Oscar in 1997 for the role, and she stands out as a calming, seen-it-all influence that knows all the angles long before the cops kick over the rocks to see the roaches that crawl underneath it--roaches she knows all too well. 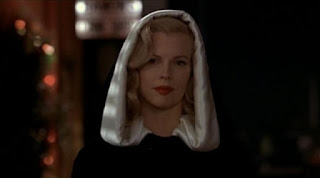 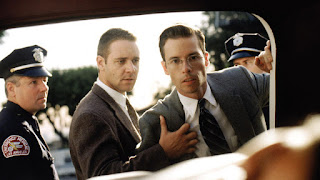 The audience reactions to Ed Exley, by my count, go from like, dislike, hate, dislike, like, hate, like, love. Bud has an honor code, but he breaks it and breaks our hearts in the process. Kevin Spacey is selfish, and the one time he tries to make something right and solve a case for the sake of justice instead of celebrity, it goes so terribly wrong that it's hard not to weep for him.

I guess what I'm saying is this month, pretend as if LA Confidential were a Christmas movie, and spend some time with an entire cast that would be on Santa's naughty list and enjoy one of the decade's finest films (and James Cromwell's finest Irish accent) in the process. 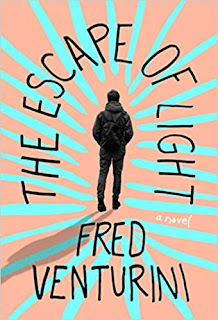 Fred Venturini is the author of The Heart Does Not Grow Back and his latest book The Escape of Light is gonna be a YA favorite of the next generation of fucked up teens. If you ever get the chance to hear him read live fucking jump - it's some rock star shit. Keep up with Fred at his website and follow him on Twitter @fredventurini. There, I said it.
Posted by jedidiah ayres at 4:44 AM