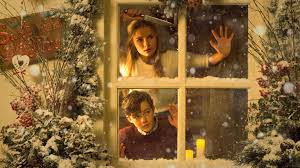 Chris Peckover's Better Watch Out (co-written with Zack Kahn) is a Christmas movie because it's set at Christmas time and the atmosphere is so steeped in the holiday season by virtue of its single suburban home locale setting being decorated with Christmas lights and trees, the actors wearing colorful sweaters and the music full of bells and choral renditions of Christmas songs. Otherwise, there's nothing remotely Christmas-y I can find about it.

No immigrant story, no savior born, zero wise men, gifts given, families bonding, angels bringing comfort in the night, no peace or goodwill toward fucking anyone. It's creepy, fucking thriller though. 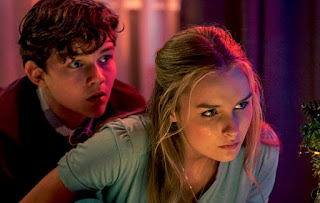 I'm trying not to give too much away and I would discourage you from watching trailers, but I will say it begins with a familiar comedic set-up: twelve year old kid (Levi Miller) on the verge of being too old for a sitter with a wild crush and plan to make a move on his childhood babysitter (Olivia DeJonge) who's back in town for the winter break. While she makes plans to sneak her boyfriend over after the kid's in bed, the kid is daydreaming and scheming with his friend strategies for making her receptive to his advances... scary movie on TV to encourage physical closeness and carefully reasoned arguments to push back against her protestations of their age-gap. 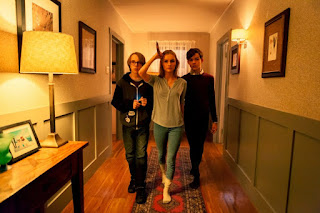 After his plan fails, she rebuffs him and he's frustrated and humiliated and vulnerable and she's embarrassed and a little angry and the atmosphere is just pretty ripe with awkwardness it becomes apparent that they're being observed by a creeper outside determined to get in. 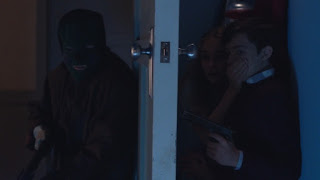 And so we transition from horny-kid comedy to psycho, stalker, home-invasion thriller with twists to keep the familiar genre-beats appealingly appalling and every carefully peeled layer of 'oh, they're going there?' reveal a comedic core dark enough for some raspy har-hars from the choked-by-the-saccharine-of-the-season holiday movie crowd.

Mix an 80s ditch-your-virginity comedy with equal part Home Alone, Straw Dogs and American Psycho... I think I should stop there except you have to know that the parents are played by Virginia Madsen and Patrick Warburton.
Posted by jedidiah ayres at 1:32 PM