Is there a better time than Christmas to set a story about the tawdriness of showbiz? The Christian holy night of Emmanuel's birth, divinity assuming human form in the lowliest circumstances (no room in the inn, born in a barn, trough for a cradle); immeasurable worth cloaked in refuse has been  turned inside out and is now celebrated with the cheapest, plastic, tackiness intended to convey the deepest, warmest, most joyous emotions. 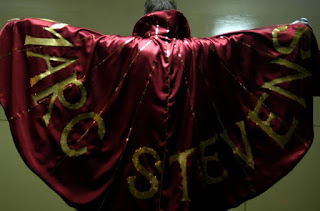 This too is showbiz. A little pancake makeup, a cheap suit seen through a fog machine and a strobe light... A little subterfuge artfully employed can provoke momentary distractions on the surface as well as immodest subterranean shifts... it's magic that way. But the magician's experience is entirely different.

Meet Marc (Laurent Lucas) singer, entertainer, conjurer, a performer of showtunes and soft-rock standards touring a fifth-tier circuit serenading the elderly, infirm and dispossessed, nightly transforming their shabby circumstance into a magical realm of unrestrained possibility. He summons their youth and vitality, and gives them the sense that they made something more of their raw material and opportunity, that the thing they've been hung up on for decades is still within their grasp or ability to control.

Every night. He fuckin does it every night. And Christmas? It's an important time for anybody whose living is made distracting people from their lives. So when he is waylaid by vehicular misadventure in a rugged, rural enclave of Belgium you'd best believe he's motivated to get to the next town and his next booked gig and meal ticket.

Fate has fucking other things in store. But when the chips are down or when a line is flubbed, when lights burn out or wardrobes malfunction, does a professional break the spell and take five? No. The show must go on.

Nothing like some time spent at the mercy of a dark foreboding forest, a backwoods mechanic and a village populated by strange, off putting locals and their quaint horrifying ways to make you yearn for the familiar pathetic life of a touring retirement home gigolo, eh?

Fabrice Du Welz' feature debut is a hell of thing and a thing of hell full of unnerving sequences and slow, roiling stomach churns. The horror takes its time too so there's plenty of room to experience each phase from frustration and discomfort to desperation and unease right on through to mortal terror and then real scares are explored. It's also funny. Sick to your stomach kind of funny, but hey kinda hilarious... if David Lynch's Deliverance sounds like your jam give it a go. Merry CrimesMas.
Posted by jedidiah ayres at 1:34 PM