I have this theory about the first day of filming for Reindeer Games. Somebody, perhaps a producer, gathers the cast and creative crew for a football huddle:

“OK, folks. Here’s the deal. I just read the latest version of the script and, well, it’s fucking ridiculous. So overwritten it’s like Leon Uris snatched Elmore Leonard’s body and stuffed themselves both into the form of Ehren Kruger, who, by the way, I’ve taken the liberty of placing in an unheated trailer on the lake next to an ice fishing shack. And who, unfortunately, will survive the experience and go on to steadily write shitty film scripts for the next twenty years. 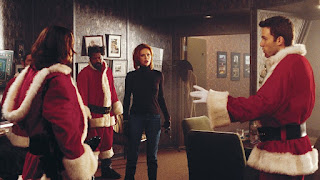 “So, since it’s hard to make a movie about people just talking and yelling and explaining shit in the snow at each other for two hours, let me propose this: Let’s own this frostbitten piece of frostbitten shit. Let’s lean way the fuck hard into it, holding hands and driving off the cliff like Thelma and Louise. Because you’re pretty goddamn good actors and because John Frankenheimer here is a freaking legend—The Manchurian Candidate, motherfuckers!—and because, well, look at him. It ain’t like he’s got too many years left. In fact, this just might be the last feature film he directs. So I want you to go out there every damn day and chew the scenery like Jack Nicholson chews a cigar. For John, and for your fat paycheck, and for the pride you have in your professionalism. Let’s play this crap so hard that it makes Con Air look like My Dinner With Andre.” 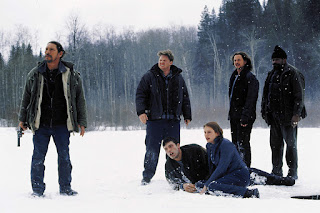 And that’s why I like Reindeer Games. Ben Affleck, Charlize Theron, Gary Sinise and Dennis Farina—oh, yes, especially Dennis Farina—play through the shitty script with robust sincerity and only the slightest and most subtle wink at the audience. (Though any production lucky enough to get Donal Logue, Danny Trejo and Clarence Williams III, and then do next to nothing with each of these first-rate scenery-chompers, deserved to be sued for cinematic malpractice.)

Roger Ebert put his finger on the film’s problems in the opening lines of his review: 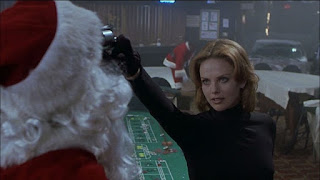 "Reindeer Games is the first All Talking Killer picture. After the setup, it consists mostly of characters explaining their actions to one another. I wish I'd had a stopwatch, to clock how many minutes are spent while one character holds a gun to another character's head and gabs. Charlize Theron and Gary Sinise between them explain so much they reminded me of Gertrude Stein's line about Ezra Pound: ‘He was a village explainer, excellent if you were a village, but if you were not, not.’ Just a nudge, and the movie would fall over into self-parody, and maybe work better. But I fear it is essentially serious, or as serious as such goofiness can be.” 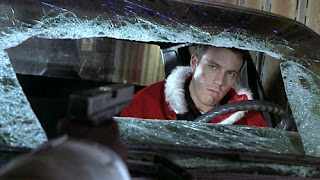 As you might guess, there’s no succinct way to summarize the story, so I’ll simply give you some strobe-light impressions of it. There’s some prison stuff, and a stabbing, and an identity switch, and a seduction, and a lot of snow, and some snarling from behind a pointed gun, and a planned casino heist, and some more snarling, and a lot more snow, and a murder in an ice shack, and a lot of talk about pecan pies and powwow safes, and a lot of dead Santas, and some creative uses for darts, and a stemwinder of a let-me-me-explain-everything-to-you-in-exhaustive-and-frankly-excruciating-detail-before-I kill-you speech that would send even the most continent filibustering congressman sprinting for the nearest restroom stall. Also, some Christmasy stuff. 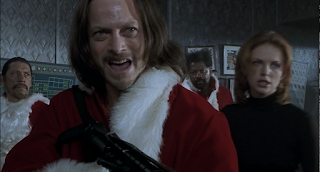 Reindeer Games, I suspect, is the sort of movie you would watch now for about five minutes at a time for its first half, finger pinwheeling above the pause button the whole while. Then, after doing all the restless shifting one can do in a La-Z-Boy, after you finally decide between barbecue and sour-cream-and-onion chips, after you got your beer just the right amount of cold, you … give yourself over to it. It is slick, it is professionally done, it looks good, it is directed as well as it can be directed, it is low fun of a mean sort, and then you get on with your life. Lather, rinse, repeat every five years or so. 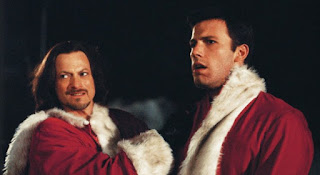 Reindeer Games is a good film for writers to watch, as well, if you believe, as I do, that you learn as much if not more from energetically bad writing as you do from the good, more nuanced stuff. If it were five percent more fun and five hundred percent more musical it could have been The Rocky Horror Picture Show of crime cinema. 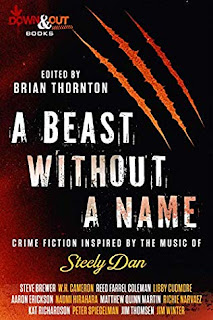 Jim Thomsen is a writer and editor who splits his time between his hometown of Bainbridge Island, Washington and the gothic lake country of north Florida. His fiction has been published in Shotgun Honey, West Coast Crime, Switchblade, Pulp Fiction and in a recent anthology of short stories based on the songs of Steely Dan. Find him at his website and follow him on Twitter @Jimthomsen.

Posted by jedidiah ayres at 6:00 AM