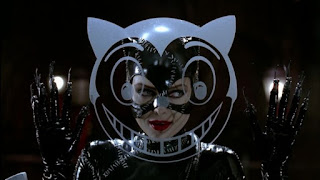 Think of it this way: Janet Van Dyne got the role of Catwoman because Mar-Vell was pregnant.

Annette Bening, who played Mar-Vell in Marvel’s Captain Marvel movie, had gone through script reads and some pre-production and costume fittings for DC’s Batman Returns. Michelle Pfeiffer, who played Janet Van Dyne in Marvel’s Ant-Man and the Wasp, took over the role, a decade removed from the Oscar-snubbed role of Stephanie Zinone in Grease 2. 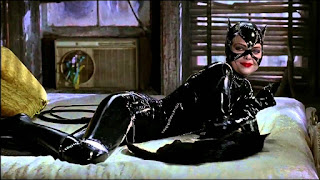 That you can’t imagine Bening in the role likely says less about her abilities than it does about Pfeiffer’s iconic performance in the role, which “Cool Rider” and that torch-song movie with the Bridges brothers had obviously prepared her for.

When we look back on how we got where we are, we’re often faced with regrets of things done and left undone. What a gift for the movie-going public, then, that Pfeiffer climbed that ladder, belting out “Cool Rider,” her determination never faltering.

Dennis Linde wrote Elvis Presley’s “Burning Love” and the Dixie Chicks’ hit “Goodbye, Earl.” He produced Kris Kristofferson’s “Jesus Was a Capricorn.” He wrote hundreds of songs for nearly as many artists. And, yet, his greatest contribution to American music is, no doubt, “Cool Rider.

In the song, Pfeiffer sings that she wants “a devil in skin-tight leather.” After seeing her in Batman Returns, don’t we all? 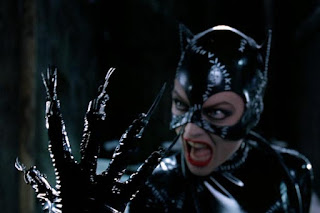 And, yet, this isn’t quite right, is it? For all the over-the-top Rocky Horror vibes cutting through the Batman movie, she’s brought the heat and the guitar rips from “Cool Rider,” added strength and guile and a shining determination to the role of Catwoman and Selina Kyle. She’s taken the role in Batman Returns and made it about the devil as much as the skin-tight leather.

And without the devil, what need is there for Christmas? 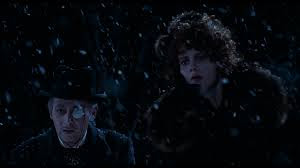 Batman Returns hit theaters right middle of the holiday shopping season, if you were shopping for Fourth of July fireworks. The 1992 summer opens at Christmas time, with a caged Baby Cobblepot eating a cat next to a Christmas tree. The typical Danny Elfman score rises as the parents (Pee-wee Herman and Simone from Pee-wee’s Big Adventure) roll the baby carriage through the snowy city park, dumping baby, carriage and all, into the creek, into the sewer.

At this point, it’s Baby Moses on the River Styx. The movie was written by Danny Waters, the same man who won an Edgar Award for Heathers and also gave us Hudson Hawk and Ford Fairlaine. 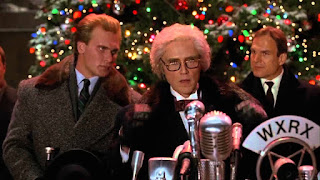 Tim Burton’s movie jumps 33 years later to a Christmas scene in Gothamfeller Center Park, or some such place, to see the lighting of the tree, Christopher Walken’s hair, Michelle Pfeiffer’s awkwardness,  then Vincent Schiavelli grinding his organ, before we got to see Baby Cobblepot all grown out, living with with penguins in the sewer, as one does. 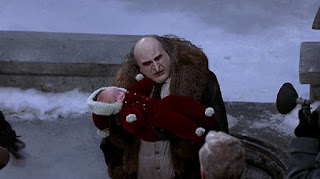 “What you put in your toilet, I put on my mantle,” the Penguin says to freshly kidnapped Christopher Walken’s Max Schreck, before pulling a thermos of sludge from a Christmas stocking.

“You flush, I flaunt it,” Penguin says, entering some kind of pact with Max Schreck (Hello, Nosferatu).

Selina Kyle rushes back to the office, and, for some reason, tells her boss, Schreck, that she’s discovered his plot to drain energy from the city and store it. He pushes her through a window, and she falls with the snow to her seeming death, before a cat licks her fingers and somehow gives her super powers? Perhaps kitty had gotten into Penguin’s thermos?

Kyle stumbles home to beat up her answering machine and make a costume from a raincoat and Hefty garbage bags, presumably the contract-grade ones.

Cut to the mayor, giving another speech: “This is the Christmas season and should be a time of healing.” A gymnast flips to the stage, steals a baby doll out of a woman’s arms, then descends into the sewers, from which Penguin ascends with a real baby, taking credit for either rescuing the kidnapped child in record time (this is Gotham, after all) or transforming a doll into a human. (I’m not sure which.) 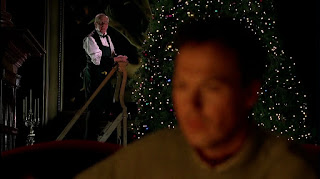 Then there’s a bunch of plot stuff, beginning as Schreck stands on the steps of the Hall of Records to deliver this line: “Have a heart. Give the Constitution a rest. It’s Christmas.”

As it happens, this movie is full of great lines delivered for comic effect and not much else. Penguin, standing at his parents’ graves, tells reporters: “I was their number one son, and they treated me like number two.” It’s funny because “number two” is common slang for a doody. 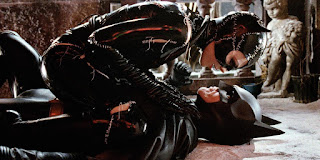 While Penguin and Schreck get to play villains throughout the film, Catwoman, as the female villain, is given the additional role of making out with Bruce Wayne. As tends to happen in comic book movies, when she is the alter ego of her villain, she kisses on the alter-ego of the hero. What can I say? It happens.  The young man in Grease 2 who she sang “Cool Rider” to dons a masked costume and they do make-out things to each other, as she does not know that the masked rider’s alter ego wears cardigans. Who understands the ways of love?

We soon, though some may argue not soon enough, learn that Penguin’s main goal is to kill all the firstborn sons of Gotham, which seems more Old Testament than Christmas story, back to Moses and Baby Cobblepot rather than the Baby Jesus.

There’s more plot, with Catwoman siding with and then against Penguin as snow and Christmas decorations abound through the Gotham nights.

By the end, we have penguins threatening Gotham with candy cane rockets, a rubber duck tank chase through the snow-covered park, and an electric kiss with Santy Claus.

With Nightmare Before Christmas and Edward Scissorhands, Batman Returns is often seen as part of Tim Burton’s Christmas trilogy. Which is fine, as far as that goes. It’s snowy and Christmas happens all around the story, with Bruce and Selina even sharing quips about mistletoe kisses.

We’ve enough redemption and rebirth and guilt and power and violence in these two hours to power any number of religious stories.

As the movie fades away, Selina Kyle has risen from the dead after a few days, more Easter than Christmas, after all. 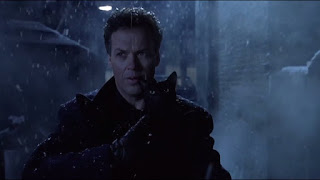 Bruce Wayne picks up a stray black cat and rides off in the back of a limousine, as the truly cool riders do, and we see Catwoman, high above it all, well beyond thoughts of living in Wayne Manor, of judging her value by how well she makes Max Schreck’s coffee or how many mistletoe kisses she can share with Bruce. “I would love to live with you in your castle,” she told Bruce before clawing him. “I just couldn’t live with myself.”

Or, as Stephanie Zinone said in Grease 2, “There’s gotta be more to life than just making out.”

Yes. The devil in skin-tight latex would know. 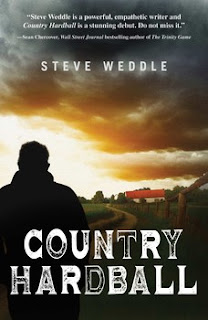 Steve Weddle is the author of Country Hardball and host of the Seven Minutes With podcast. He is a founder of the crime fiction site Do Some Damage and the former publisher of Needle magazine. You can follow him on Twitter @steveweddle.

Posted by jedidiah ayres at 6:22 AM