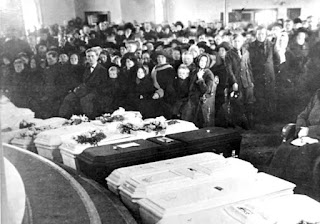 “The [sic] powers are more like administrators, who manipulate other people’s history but produce none of their own. They are the stock-jobbers of history, lives are their units of exchange. Lives as they are lived, deaths as they are died, all that is made of flesh, blood, semen, bone, fire, pain, shit, madness, intoxication, visions, everything that has been passing down here forever, is real history.”

― Thomas Pynchon, AGAINST THE DAY 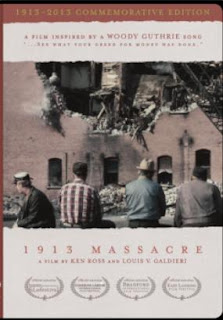 It’s been my experience that during the holidays more than any other time of the year your average slob doesn’t like having their perceptions challenged. And honestly, I don’t blame the slobs for this. The season is stressful enough. Even if their perceptions are erroneous and their views deluded, having their positions intact, like that third glass of booze or that saved prescriptive tranquilizer, turns out to be critical to their survival this season.

But then again, if you’re like me, one who intermittently craves dynamiting the bridges of expectation, you don’t mind confronting the average citizen’s beliefs. Secretly you and I relish the prickly role of gadfly, chipping away at all manner of sanctimonious drivel that seems to manifests itself in Herculean form during this festive stretch. Familial or non, you’ve no issue with kneecapping your jingoistic brother-in-law swilling eggnog by the fire, you are fearless calling out that neighbor misquoting Charles Dickens, and you have zero qualms about handing your malodorous aunt a magnification loupe, imploring her to peer closer at the inherent darkness residing her poor, distasteful beliefs. Sure, it can be awkward. Inevitably disappointment and anger pools, and things can get real ugly real quick. Oh by gosh by golly, how the mistletoe and holly stupor is preferred. 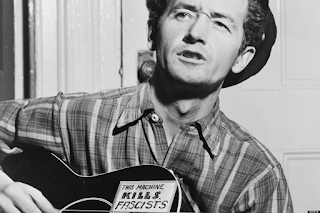 Which brings at last me to my cinematic recommendation for this Hardboiled Wonderland post, a recent documentary inspired by the balladeer of injustice Woodrow “Woody” Guthrie himself—a little flick called 1913 Massacre.

For those unacquainted with the violent history of organized labor versus ruthless capital in this country of ours, on Christmas Eve 1913 a ghastly calamity befell the small mining town of Calumet, Michigan. Striking workers of the Calumet and Hecla Mining Company, along with their wives and children, had assembled upstairs at a downtown building known as the Italian Hall for some good will and yuletide cheer. Not long after their merrymaking began, some black-hearted asshole yelled fire and all hell broke loose. Making for the best exit, seventy-four terrified people were crushed and suffocated to death at the bottom of a steep stairway. Among the dead were (brace yourself) fifty-nine, yes, fifty-nine children. And guess what? It turns out there never was a fire. 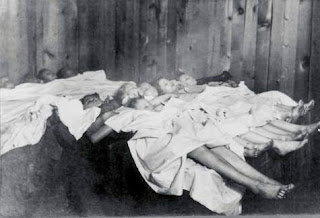 Being America, several halfhearted investigations followed the event and as these things go, discrepancies and finger pointing propagated on all fronts. Lord, who would commit such a heinous act? Some maintain that the doors at the bottom of the Italian Hall's stairway opened inward preventing exit, some say (this includes Woody) the doors might have even been barred from the outside. Was some Pinkerton thug or anti-union strikebreaker under the winking eye of the company to blame? Perhaps. Were eyewitnesses’ testimonies coerced and twisted to suit a convenient narrative? Perhaps. Did the local and national newspapers, owned by slimy investors sympathetic to the mining company’s interests (good on ya, Wall Street) misrepresent and effectively bury the tragedy’s facts? Insidious and familiar as it may sound…possibly. Regardless, the culprit who yelled the word that claimed seventy-four lives has never been determined, and the echoes of the mass murder linger amongst the townsfolk of Calumet to this day. 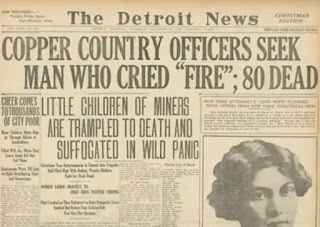 Which brings me back, all the way back to those who need to be challenged on their perceptions this holiday season.

In these times of ours, this post-truth age of shadowy swine and inscrutable graft, the arguments and circumstances presented in this picture are hauntingly recognizable. Those who are uncomfortable with acknowledging possible corruption at the cores of power and the institutions that beg for our collective trust need to be exposed to bitter history like this. They might not like it. It may cause them significant cognitive dissonance. They may even decide to finally write you out of their wills, but strap them to a chair and make them watch it for their own damn good. 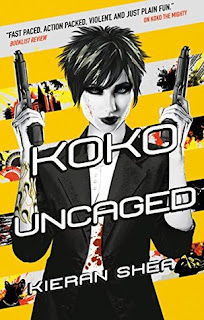 Kieran Shea is the author of Off Rock as well as the Koko Marsteller series; Koko Takes a Holiday, Koko the Mighty and Koko Uncaged. He used to have a blog and a Twitter handle and all that fun shit, but you can't find him online any longer because fuck you and bah humbug.
Posted by jedidiah ayres at 5:10 AM