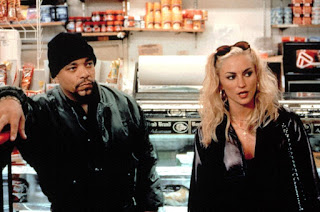 Few movies integrate a crime plot and a Christmas story as well or as completely as Abel Ferrara’s ‘R Xmas.  And it’s Christmas in a very specific time and place, as a pre-credit scroll tells us: “In December of 1993 the Honorable David Dinkins was completing his first and only term as Mayor of New York.”  I’m not sure how much these words mean to somebody not from New York City, but for those who lived in New York through the Dinkins years, from 1990-1993, it has a clear connotation.  New York City was at a low point, with both crime and economic struggle high.

Even if you’re not from New York, you sense from the words that the city could not have been thriving. If it had been, wouldn’t the mayor have been elected to a second term? 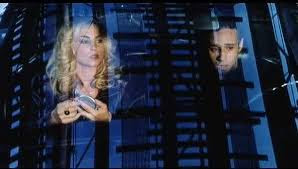 The movie opens with what’s clearly a scene from a Christmas past. Little children wearing adult costumes, we soon realize, are performing a theatrical version of A Christmas Carol for an elementary school production during the holiday season, and in the auditorium watching are all the parents. The school looks like one with resources; the parents, nearly all-white, are well-dressed and apparently affluent. One father (Lillo Brancato) has his camcorder trained at his daughter, who has a lead role, and we’ll follow this father as he leaves the school with his daughter and wife (Drea de Matteo) after the play. The daughter has brown skin, and the family speak Spanish together as well as English, since they are, we realize, Latinx. On a horse and buggy ride downtown, as they proceed down Museum Mile on 5th Avenue in Manhattan, the mother asks her daughter what museum they are passing – the Guggenheim Museum – and they have a humorous back and forth about how to pronounce the word “Guggenheim”. The parents seem like they are intent on educating their child well, with culture, but their manner and down to earth way of talking mark them as grounded. They take their daughter to a department store Santa – how much more typical a Christmas thing could you do – and while at the store, the father does all he can to acquire for their girl a Party Girl doll, the must-have toy that year. He fails at the store when another woman grabs the last doll off the shelf just before he reaches it (and he gets to watch the fortunate woman nearly come to blows with another woman who puts her hands on the doll), but that doesn’t mean he and his wife will give up their pursuit for that gift. 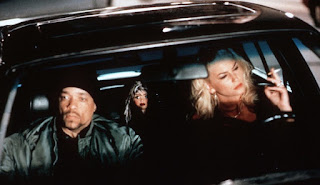 So far, so good. Later that evening, grandma comes over to watch their girl, and the mother and father go out. Good Manhattanites in a fancy building, they have little red Christmas envelopes of cash for their doorman and for the guy out front who has brought their car around from the garage. Only after they take a long ride in this car, going past Yankee Stadium and up to what appears to be Washington Heights (northern Manhattan) or the Bronx and then walk into another apartment they have in a decidedly unglamorous apartment building do we see how they make their money, as serious, calm, disciplined drug dealers. The father heads a crew that labels its cocaine bags “TKO”, and that coke is sold by their associates/employees on the street. What began as a film that showed us a nostalgic view of a non-commercialized Christmas, with kids in all the parts, has turned into a movie about commercialism in different forms, both the crass commerce of Christmas and the viciousness that can breed (the two women fighting over the party doll) and the just as blunt and even more dangerous commerce that comes with drug dealing. 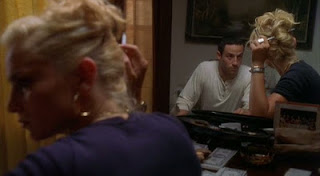 ‘R Xmas is Abel Ferrara working in top form, quietly subversive. The mother and father’s drug dealing is viewed with the matter of factness you’d give to any job. It’s somewhat mundane, takes focus, and comes with aggravations and anxieties. But it allows them to live the life they want to lead in a very expensive city. They can support family members, and most of all make a good life for their daughter. As the mother says at one point, without a hint of snobbery but with a sincerity you can’t but feel for when you think of the state of many public schools, she doesn’t want to take their daughter out of private school. Their daughter is clearly the apple of both their eyes, and on Christmas Eve, unwilling to let the holiday pass without getting that Party Girl doll for their daughter, they make a trip to an outer borough to get the doll from a guy who sells them on the black market. While the mother is at the guy’s warehouse getting the toy, her husband leaves the car to take care of some unnamed business, and it’s here that we learn there are other forces watching them who have their own nasty holiday agenda. That agenda entails extortion, or what you might call forcing “gifts” from them. Tis the season for taking as much as it is the season for giving. 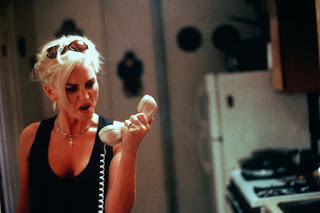 Christmas songs and Christmas imagery – trees, lights, crosses, decorations – permeate ‘R Xmas.  The soundtrack, done by Schooly D, twists seasonal songs like “Silent Night” into menacing background music. The urgency behind the parents getting the Party Doll to their daughter and the mother getting the demanded money to the weird extortionist (Ice-T) are almost, if not quite, the same. And is the daughter any different than most young children who just hope to get what they wish for on Christmas? She’s oblivious to the difficulties her parents endure on the job just as another child would be of a parent in a more conventional, but still stress-inducing, profession. On Christmas morning, unwrapping her gifts, the girl says, “This is the best Christmas ever”. She means it, and for her it’s true, but it’s a line that contains an irony she couldn’t begin to fathom. 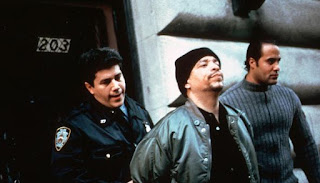 At 85 minutes, ‘R Xmas is a fast, easy watch. But there’s a lot going on in that short running time.  Everyone gives committed performances – Drea de Matteo, in particular, shines – and Abel Ferrara directs with his usual rigor. Has the man ever made a sloppy film? I don’t think so. Some of his movies work better than others, but Ferrara is never slack. You’ll find Christmas films more famous than this one, more celebrated and on a larger scale, but ‘R Xmas ranks among the most trenchant. 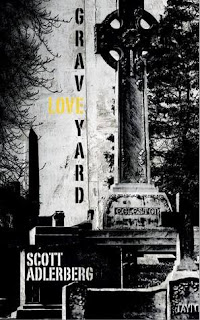 Scott Adlerberg is author of the books Jack Waters, Spiders & Flies, Jungle Horses, Summerfield's Film and Graveyard Love. Follow him on Twitter @ScottAdlerberg.
Posted by jedidiah ayres at 5:19 AM