My first Bond was Timothy Dalton in The Living Daylights which I fucking loved as a twelve year old. I knew the name Bond, James Bond, but the movies (nevermind the books) were not part of my family's cultural consumption. Being the son of a preacher I grew up understanding popular culture first through the lens of the moral behavior of the hero and 007 was a severely compromised hero, mostly because of his endless womanizing. Even understanding this I fell hard for his onscreen adventures when I first encountered them. 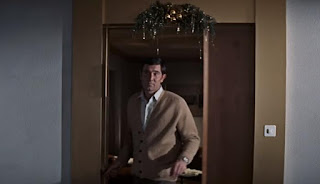 Dalton didn't last long in the role. The next several Bondian escapades I embarked upon were of the Roger Moore variety and sure I enjoyed them too, though even I could tell there was silliness afoot, but one snowy night I tuned into the terrestrial local television station for a broadcast of On Her Majesty's Secret Service and found an altogether different Bond than I'd previously encountered.

One that I was more attuned to and intrigued by. Fair warning: spoilers follow.

George Lazenby's single turn in the role marked a temporary franchise shift from hi-tech gadgetry and over the top set pieces, though there's only so much fealty to physics and probability that Ian Fleming, director Peter R. Hunt and most importantly producers Albert R. Broccoli and Harry Saltzman were capable of (and of course those limits are a huge part of their appeal - this is not a criticism) and Bond still finds himself involved in a great number physical challenges including skiing on one plank in the dark, a wonderful climactic bobsled chase and the rigors of sexually satisfying multiple partners in a single night (Bond robotically delivers verbatim seduction lines to an unexpected late night visitor in his room that we'd heard him give a beautiful mark playfully a few minutes earlier, culminating with the flattery "you inspire me," this time adding the addendum "you'll have to" before taking a deep breath and getting to it).

The movie is notable also for its especially tragic romance as Bond confesses his love to Diana Rigg and even goes so far as to marry her before what must always happen to Bond's women happens to her. In fact it's the final moment of the movie making it, as far as I know, the only Bond movie to end on such a sad moment and the fact that Lazenby never returns in the role makes that climax even more emotionally resonant.

The film takes place in December in the Swiss Alps high atop a mountain peak in a research facility looking down upon a ski resort and the climactic action on Christmas Eve and Christmas Day and the film's snowy locale and sets are decorated with Christmas fare all the way through from a sleigh ride, Christmas trees, strings of lights, presents, spiked egg nog and boughs of holly. 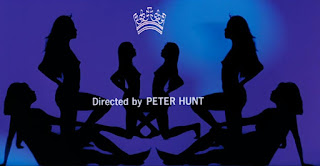 The action may be less spectacle-driven than other franchise entries, but the multiple hand to hand contests are robust and energetically edited. Christmas makes its way into action as during one fight Bond bangs his adversary's head against bells, and even the title sequence ends with a sexy silhouetted configuration arguably resembling a nativity scene.

Personally I prefer the flavor of Bond on display here and in something like From Russia With Love to the excesses of Moonraker and Die Another Day (though I do enjoy something from every one of the franchise leads), but if you're looking for a Bondian Holiday double feature you could pair On Her Majesty's Secret Service with The World is Not Enough because Christmas doesn't have to come only once a year.
Posted by jedidiah ayres at 10:22 AM