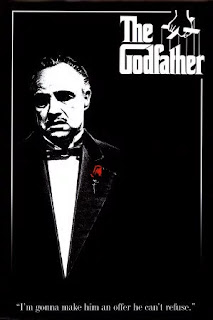 Act I in The Godfather (1972) was, on its own, a complete film. And it was a true Christmas movie.

By the time Act I ends with the killing of Solozzo the Turk and Police Captain McCluskey at Louis Italian-American Restaurant—and the first act-break montage concludes—the run-time is already that of a pretty standard film, around an hour and 25 minutes.

And at that point we have an entire story replete with a full character arc: The established kingdom is facing a new threat, a Turk who has an unassailable Shield, and our realm’s king, Godfather Vito Corleone (trans., Lionheart), has been stricken. So the youngest and worthiest of his three sons, Michael, must set aside his life as an errant soldier removed from the troubles to of the kingdom (That’s my family, Kay. It’s not me.) to become the new prince who must take up the sword to defend lord and land. Even though it means his indefinite exile from his family and his lady, he fulfills his duty as the reluctant yet formidable knight-protector. The end. 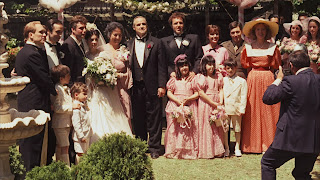 At least it could have ended there, and if it had, it would have been excellent as a stand-alone. Fortunately, we were further blessed with a continued story in the form of two more sequel acts within the same 1972 film, as well as three more in the 1974 film, where the tale of The Godfather finally ends absolutely (notwithstanding a ludicrous 1990 film that inexplicably got away with using the same title, and character names, and actors, and writers, and director).

And the entirety of this Act I film is set during Christmastime. 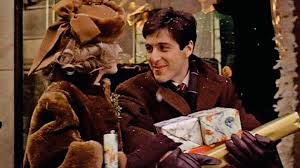 Michael and Kay bustle out of Best & Co. with armloads of wrapped presents into the gently falling snow of New York City, which is decked overhead with candy canes and evergreen wreaths. They discuss gifts for the family and, most importantly, that all Michael wants for Christmas is the love of his sweet Kay.

Meanwhile, Luca Brasi dons his armor and prepares his weapon while the radio plays Have Yourself a Merry Little Christmas, ironically announcing that “from now on your troubles will be out of sight.” 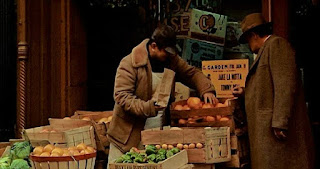 Tom Hagen is abducted while leaving a gift-shop with a new winter sled in his arms, presumably for his child. The Turk, who captures him in front of the spinning decoration of Santa and Mrs. Claus, first wishes Tom a merry Christmas, and then says, “If I wanted to kill you, you’d be dead already.” This is while the store’s music sings that Santa is “gonna find out who’s naughty and nice.” Tom is later held prisoner on a lot that sells Christmas trees.

The Godfather likewise wishes the fruit vendor a merry Christmas before being gunned down. And the gateway to his hospital, where Michael stands guard as protector, glows with the halo of Christmas lights. 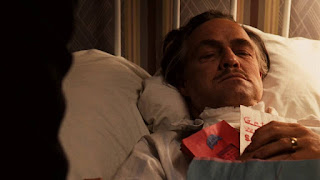 But it’s not a Christmas movie only because of the seasonal setting. Like all good Christmas movies, it’s a fairy tale. Some such Christmas fairy tales have literal fairies and goblins and magic; others take the classic route of a princess in need of rescue. In this case, as I indicate above (a little heavy-handedly), Act I of The Godfather is the kind of classic fairy tale about the fall of the good old lionhearted king at the hands of the heretic villain (“Turk”), and about the crusade of the youngest of the three princes to save the kingdom for the love of his lady and the protection of his people.

But it’s not a Christmas movie only because of that either. For me and my family, the film was an unofficial Christmas tradition. I remember my grandfather—an old-school patriarch in his own right, whom we all called “Papa Jack”—as he distractedly stoked the flames in the fireplace under the twinkle of lights from the retro Christmas tree and sputnik-era ornaments, while he watched The Godfather playing on the old box TV. I can’t tell you how many years this same scene played out. We would all gather down there in the basement lounge—a low-ceilinged spread which could have been a set on the Dean Martin Show—and we nestled into the endless couches to watch Michael Corleone fire shots into McCluskey’s throat and forehead as we waited for the warm cheer of our Christmas Eve festivities to commence. 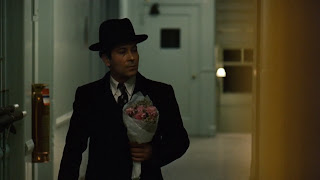 That nostalgia never left me. Even now when I hear the horn of Nino Rota’s theme that opens the film, I’m filled with the holiday spirit as much as if I were listening to Bing Crosby’s White Christmas.

Think about what Christmas movies are all about, from the odd excellence of It’s a Wonderful Life, to the cheesiest installment in the Hallmark franchise, to any version of the Dickens classic A Christmas Carol. 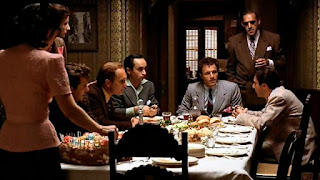 They’re about changing your ways and learning what’s important in life: family, love, and finding your right place within all that. They’re about the kind of moment in which the previously cold and distant son holds his father’s hand in the hospital and whispers tenderly, “Just lie here, pop. I’ll take care of you. I’m with you now. I’m with you.” And the father looks up from his hospital bed, unable to speak, but smiling nonetheless with a tear in his eye. That’s a Christmas moment.

But for a character to reach that ideal state of “Christmas-actualization”—well, it’s tough to do. It requires self-sacrifice, and it even requires facing death, literally.

This can come in the form of bridge suicide and an alternate world in which you have been annihilated. Or it’s the frantic life-or-death search for a lost child out in the freezing weather on Christmas Eve. Or it’s the travel to your own funeral with the black-cloaked Ghost of Christmas Future. 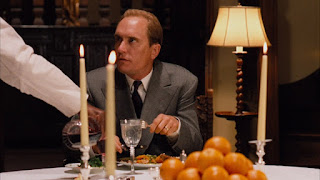 Or it’s facing the murderous Turk and struggling to find the words you want to say in the old Italian, until you finally find them in your American English. And you speak the truth about what you wish for with great hope, “What I want, what's most important to me, is that I have a guarantee. No more attempts on my father's life.”

But then, when it becomes clear that it’s not that easy, that sacrifice is necessary, you have to take up the role of a protective angel, like your namesake, in this case a kind of Christmas angel of death. Saving your loved ones from villains might mean that you are exiled from them, but now that you’ve changed and have become a part of the family again, now that you’ve found your rightful place, you know it’s what you have to do. That’s what family and love is all about. That’s what Christmas is all about. 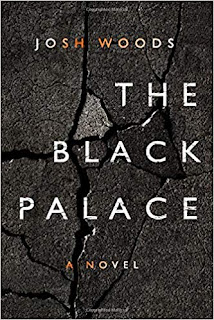 Josh Woods is the author of The Black Palace and O Monstrous World! and editor of the anthologies Surreal South '13, Vs. and The Book of Villains. He is also the host of The Monster Professor podcast. Keep up with him at his website.
Posted by jedidiah ayres at 5:16 AM

Brilliant. Now I possess the hammer with which to break all those “ Is DIEHARD a Christmas movie?” lines of conversation. Thank you!

welcome to the party, pal